There is no official public transport system in Namibia, but privately-owned bus services run between Windhoek and Cape Town, Johannesburg, Victoria Falls and Swakopmund.

Namibia has a well-established road infrastructure. The majority of towns and communities can be reached by a network of quality gravel trunk, main and district road networks totalling a distance of 48,117 km, including 4,500 km of tarred roads. The country is linked by road to Angola, Zambia, Zimbabwe, Botswana and South Africa. The Trans-Kalahari and the Trans-Caprivi Highways provide a fast and comfortable road link between Namibia’s port of Walvis Bay on the Atlantic coast, and landlocked neighbouring countries. In particular, the Trans-Kalahari Highway links the port to Botswana, and the Gauteng province, the industrial heart of South Africa. The Trans-Caprivi Highway links Namibia’s landlocked neighbouring countries of Botswana, Zambia, Zimbabwe and the Democratic Republic of Congo to the port of Walvis Bay.

The Highways provide a regional transport corridor, intended to reduce the time-span for movement of imports and exports from the neighbouring countries to the markets of Western Europe and the Americas by at least five days compared to traditional routes in Southern Africa.

The Trans-Kalahari Highway has turned Namibia into a gateway location and has led to the evolution of the western corridor concept and the development it portends for the whole SADC region.

Although Namibia has over 300 known airfields, at locations including Sesriem, Hardap, Ai-Ais, Okaukuejo, Halali, Namutoni, Mile 72, Mile 108, Terrace Bay, Palmwag, Khorixas, Sesfontein and Popa Falls, only 16 are licensed. Travellers are cautioned not to land at unlicensed airfields, as the conditions are not always known. Aircraft fuel is usually not available at the landing strips, and landings must be arranged in advance.

Walvis Bay is the country’s main port while Lüderitz is a smaller, secondary port. The ports are operated by the Namibian Ports Authority. The port of Walvis Bay has a depth of 12.8 metres and can accommodate container vessels with a capacity of 2 200–2 400 tonnes. Lüderitz Harbour boasts a new cargo and container quay wall which is 500 metres in length and the channel has a draft of –8.15 metres, which can accommodate vessels up to 150 metres in length.

Lüderitz, although traditionally a fishing port, with a new cargo and container quay completed in 2000. The port is strategically located to cater for southern Namibia and the northern Cape.

Walvis Bay, the only deep-sea harbour, is a safe and economical option for the country's export and import trade, especially to southern, west and central Africa and Europe.

Namibia's railway network is managed by TransNamib Holdings Ltd and comprises 2 382 km of 1.067 m narrow gauge railway lines. The main line runs from the South African border via Keetmanshoop to Windhoek, Okahandja, Swakopmund and Walvis Bay. A northern section links up with Omaruru, Otjiwarongo, Otavi, Tsumeb and Grootfontein. Currently under construction is the extension from Tsumeb to Oshikango on the Angolan border.

The Walvis Bay corridor is the name for a newly constructed network of transport links that provides access to landlocked Southern Africa for destinations west of the continent by the shortest possible route. Completed in 1998 and using the port of Walvis Bay as the trade gateway, its main arteries are the TransCaprivi and TransKalahari highways. The Walvis Bay to Grootfontein railway line also forms part of the corridor. 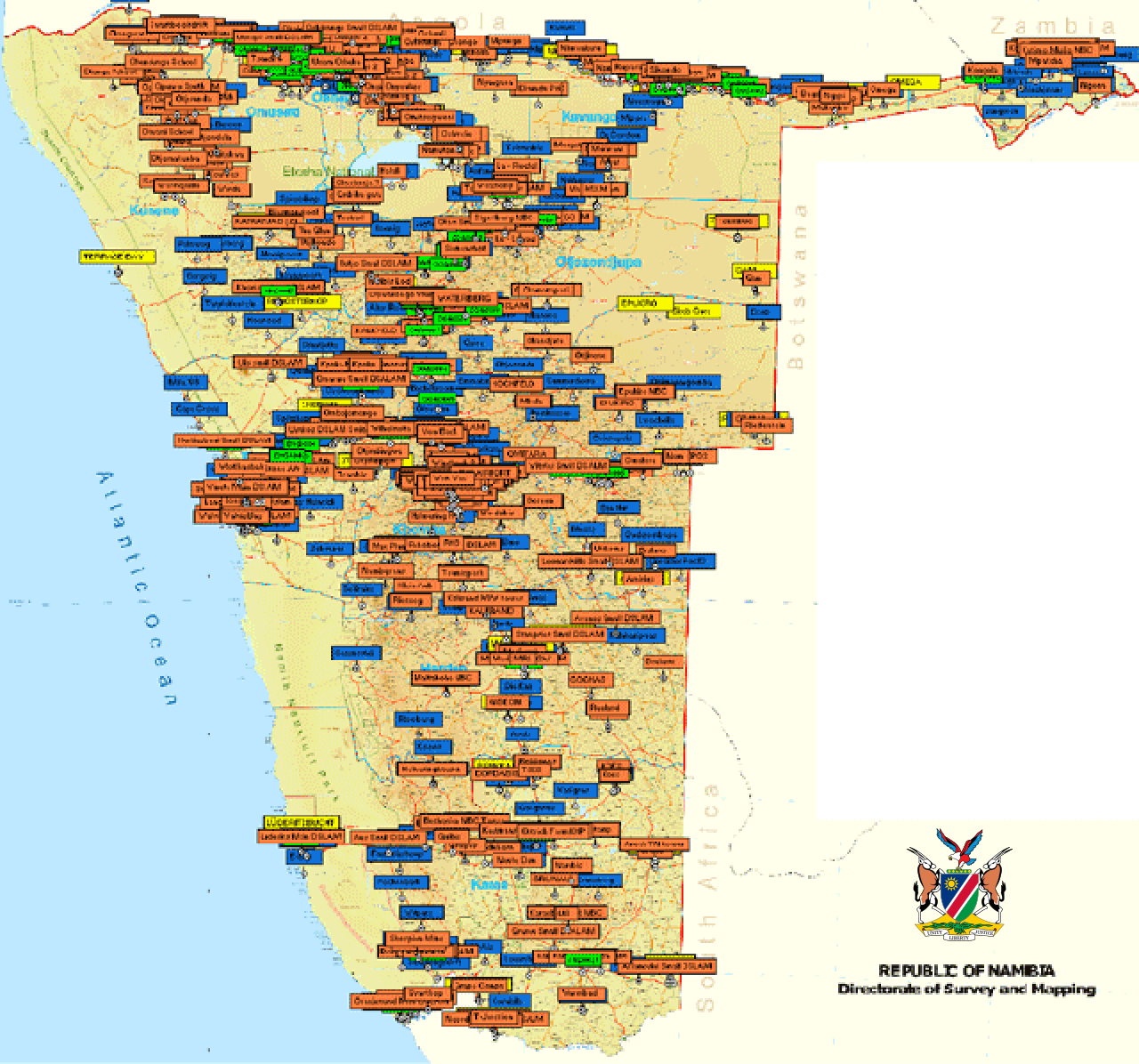 Namibia has cellular coverage in most towns and road coverage along virtually all of the major routes in the country. Namibia’s cellular network service providers are MTC, operational since 1995, and Cell One, which was launched in March 2007.

Below is the combined map of all cellular operators’ towers in Namibia. This gives an indication of coverage in the country.

Namibia has one of the most modern postal infrastructures in Africa, putting it on par with the rest of the world as regards communications. Namibia’s postal services are operated by the state-owned enterprise, Namibia Post Ltd, which also offers courier services. Nampost has more than 122 post offices and ±93 000 registered mailbox holders countrywide and is affiliated to the Universal Postal Union.”

The power operator in Namibia is NamPower. Namibia produces electricity via two types of generation namely: hydro and thermal. With the provision of electricity a major dependency for ICTs, Namibia is well electrified for a partial populated country. It furthermore has major plans for the further expansion of the electrical grid.

Set out below is major lines of the current electrical grid of Namibia.